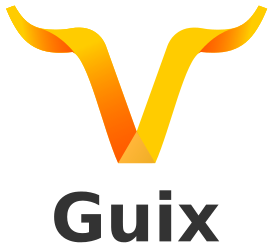 A key design principle behind GNU Guix as a package manager is its extensibility, i.e. allowing users to easily write their own package definitions. Thus this post aims to serve as a starting reference for doing precisely that.

The package I'll be using for this demonstration is LÖVE-Nuklear, which provide bindings to the immediate mode GUI library, Nuklear for the Lua game engine, LÖVE.

All Guix packages are defined in source files written in Guile Scheme, with each source corresponding to a single module that contains packages related along a common theme. For example, libraries for specific programming languages like Golang or Rust, enduser applications for music or games, implementations of particular protocols like FTP or IPFS, and so on.

My example module shall only contain a single package, but in general there can be many. To begin, we first load the modules required to define the package:

All package definitions require at least 4 modules, which are all located in the guix namespace:

Of course in practice, the vast majority of software contain dependencies that must also be loaded. And if these dependencies are already packaged, then they can be found under the gnu packages namespace. For my example of love-nuklear, the only dependency is the luajit package from the lua module.

Now it's time to define the actual package, starting with its basic information and metadata:

A few points worth mentioning:

As briefly mentioned earlier, although Guix supports several source fetching methods, in practice you'll mostly be using either url-fetch from the download module, or git-fetch from the git-download module. Whenever possible, you should prefer the former, since it is more efficient.

For LÖVE-Nuklear however, git-fetch was needed because the source code of Nuklear, which is not bundled in the tarball release, but is instead tracked as a git-submodule, is required to build the final shared object. So to do this, we use git-fetch with (recursive? #t), as shown below:

Before building from the source, Guix checks that the hash of the downloaded files is the same as that supplied by you, the packager. When using url-fetch, the base32 hash of the project's source will be directly computed by Guix and displayed for your convenience after you execute $ guix download <https://url-package-source>. When using git-fetch however, you must first git clone the repository (including the submodules if applicable), then invoke $ guix hash -xr <path/to/git/source>, where the -x flag tells Guix to ignore VCS files and -r tells Guix to compute the hash recursively.

Guix differentiates between 3 types of dependencies:

As already stated, the only runtime dependency, and thus input of love-nuklear is luajit:

The following snippet shows the first build procedure that was successful in installing the love-nuklear package:

In the end though, I decided it was better to make the change upstream, i.e. add an install target to the CMake build procedure of LÖVE-Nuklear. After this change was kindly merged by its author, love-nuklear was then able to be built and installed smoothly with zero modifications to the standard phases of the cmake-build-system, resulting in the cleaner snippet shown below:

But just keep in mind that, in order to produce a successful package build, sometimes the only option is to modify the standard phases of one's build system.

Once the first draft of your package definition is complete, you are then ready to test out its correctness by attempting to build it locally.

To do so, just run $ guix build -K --file=<path/to/package/def>. Make sure to add a line at the end of your package module to actually evaluate the package definiton (love-nuklear for my example), as the --file flag tells Guix to build the package that the source within <path/to/package/def> evaluates to. The -K flag is short for --keep-failed, thus failed partial build results will be left in your /tmp directory instead of being removed.

Another source of useful debugging information is the build log, which in addition to being printed to STDIN on each build, is also written to an appropriate directory identified by its build hash in /var/guix/.

Through the iterative process of fixing errors reported in the build log, and occasionally inspecting the contents of failed partial builds, I was able to quickly bring the package definition of LÖVE-Nuklear to a successful state, whose constituent components are exactly the snippets already showcased earlier. But for viewing convenience, here's the finalized package definiton in its totality:

If you'd like to submit your package definition upstream, i.e. have it added to the GNU Guix ecosystem, then it's important to run $ guix lint before submitting it to the project as a patch. This command performs useful checks on your package definition, ensuring it conforms to the GNU Guix standard. All available checkers can be listed with $ guix lint --list-checkers. Here are what some of them do:

Lastly, I'm pleased to inform that my package definition for LÖVE-Nuklear has been accepted into the GNU Guix project. So if you'd like to check out this cool GUI module for the LÖVE game engine on Guix yourself, then it's as simple as: